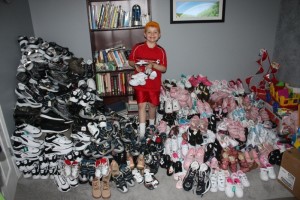 One of the Highlights for me so far in this amazing Olympics is the fastest man in the world-Usain Bolt.  It is not that he is the fastest man in the world; or that he worked incredibly hard to develop such strength in faith, fitness, dedication and perseverance to again capture the Olympic Gold in record breaking time. What captured my heart was his personal story. A man who came from extreme poverty in Jamaica was offered a contract with Puma and in his agreement he remembered the children in need from his village. He remembered they needed shoes and incorporated that need to be met in his Puma contract. He remembered they needed electricity in the schools and provided it, computers to learn and met this need also and simply inspired many other children to Dream Out Loud and go for gold.

It is hard to imagine in a province like Alberta with such wealth; we too have children who will not go to school with new running shoes. From April 2009 to March 31st 2010 ACWS Shelter Data handled over 56,069 crisis calls; 11,700 women and children were resident in shelters and over 16,000 women and children were turned away because they were unable to accommodate. Unbelievable numbers! No shoes; no home!

Stephen’s Backpacks Society is on the homestretch of our race to provide for this need through our Footprints 2012 campaign.

Starbucks is offering a free Grande drink if you bring in a pair of new running shoes. Our grand finale will take place at Cross Iron Starbucks-stay tuned for more details. Starbucks will be doing their grand tally of shoes. Come out and meet a four year old who gave up his fifth birthday money to bring children in need shoes for school. Superstore in Airdrie, Starbucks (Calgary, Cochrane and Airdrie) and Cobs Bread (Airdrie) is taking donations in the next two weeks. The Calgary Rotary North has committed their support. While doing your back to school shopping remember a child in need and pick up an extra pair of running shoes. Our greatest need is sizes 4-8 adult in male and female. With over 1100 pairs of shoes already collected, we still have to collect more to meet the need.  New running shoes are a simple necessity for our children but a huge luxury for others. Please donate today!