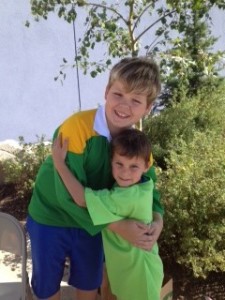 Starbucks at CrossIron Mills hosted the best birthday party ever today for an amazing 5 year old Calgarian boy called Lucas. He ended a very successful campaign for Stephens Backpacks Footprints 2012. Lucas gave up his Birthday to help Stephen with new running shoes for children in need. He brought the last pairs of new shoes to make the astounding number of almost 2000 pairs which will be distributed next week before school starts. Starbucks gave Lucas a cake donated by 1st Ave Bakery in Airdrie; gifts and just the most amazing birthday party ever. Air 106.1 was on site to provide great music. Starbucks raised over $2000 in our Footprints Campaign 2012 and many baskets of new running shoes collected by all the Starbucks stores were presented at this wonderful birthday. Stephen says “Lucas has a great heart and gave the best gift to a child who has nothing!” “He gave up his Birthday to make another kid happy!” Lucas has already booked his spot on the bus for Dec 24th for him and his family to deliver Christmas Backpacks. You have the right spirit Lucas. Children like you change the world!